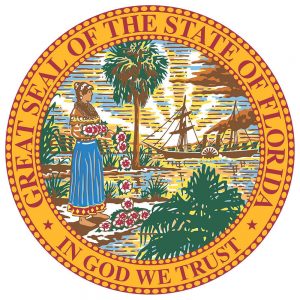 Knife laws in Florida consider the only ballistic knife as an illegal one. Concealment of a knife is an issue unless been licensed.

Overall, Florida’s knife laws are quite friendly once you get to know them.

Illegal knives and other restrictions

The code 790.225 (2011) clearly tells about the illegality of ballistic knives in Florida.

”(1)It is unlawful for any person to manufacture, display, sell, own, possess, or use a ballistic self-propelled knife which is a device that propels a knifelike blade as a projectile and which physically separates the blade from the device by means of a coil spring, elastic material, or compressed gas. A ballistic self-propelled knife is declared to be a dangerous or deadly weapon and a contraband item. It shall be subject to seizure and shall be disposed of.”

Laws of concealing a knife

You can open-carry a knife anywhere but whenever it is about concealing, the law becomes strict.

Concealing a knife is considered as a deadly or dangerous weapon. A common pocketknife, plastic knife, or blunt-bladed table knife are legal to carry concealed but the blade size of the knife must be under 4 inches.

A “common pocketknife” is “a type of knife occurring frequently in the community, which has a blade that folds into the handle and that can be carried in one’s pocket.”

“790.001(3) (a) “Concealed weapon” means any dirk, metallic knuckles, Billie, tear gas gun, chemical weapon or device, or other deadly weapons (except a firearm or a common pocketknife, plastic knife, or blunt-bladed table knife) carried on or about a person in such a manner as to conceal the weapon from the ordinary sight of another person.”

A person who is not licensed for a dangerous weapon and conceals one, he/she commits the misdemeanor of the first degree which is punishable. The code 790.01 says,

“(1)Except as provided in subsection (3), a person who is not licensed under s. 790.06 and who carries a concealed weapon or electric weapon or device on or about his or her person commits a misdemeanor of the first degree, punishable as provided in s. 775.082 or s. 775.083.”

Some exceptions are here. Box cutters, multi-tools and these sorts of knives can be concealed for the working purposes as working tools.

Blade size of the knives

According to Florida knife laws, there is no blade length limit for knives to be restricted or illegal.

But for a common pocketknife, plastic knife, or blunt-bladed table knife, “4 inches” is a fixed and legal size for the blades otherwise concealing these knives would be illegal.

Usually, a person cannot carry a knife in school premises unless he/she has a permit or a license.

A license of a dangerous knife can get you a permit for carrying these dangerous knives in schools as well as universities or kindergarten and even other particular locations. The code 790.06 License to carry concealed weapon or firearm explains thoroughly about these.

Knife laws for the minors in Florida

It is illegal to sell, transfer or carry any knife under the age of 18 or any person of unsound mind other than pocket knives. Other knives will be legal to give any minor (less than 18 years) unless there is a permit from the guardian or parents.

(b)The parent or guardian must maintain possession of the firearm except pursuant to s.790.22.”

Other than the ballistic knives, there are no knives illegal to carry, sell or buy in Florida.

Sum up to the knife laws in Florida

Is a ballistic knife the same as OTF (out the front)? I’m kinda confused about certain info I’m finding.