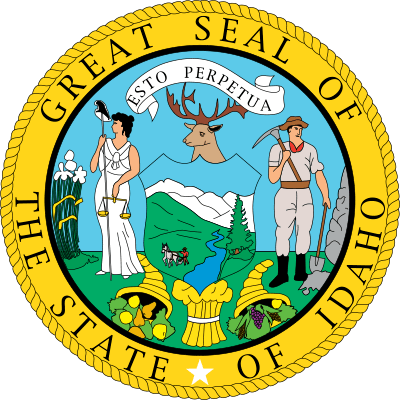 According to the knife laws in Idaho, any knives can be owned and be carried openly. But there is quite a long list of restrictions on concealed carry knives. Blade size is also a big matter here.

Knife laws in Idaho are pretty complicated than the other states and you got to remember a lot of things while knowing about the laws.

All knives are Legal in Idaho

No knives are banned or illegal in Idaho.

So, almost all sorts of knives are legal here. But there are some rule and regulations while using those.

Concealed-Carry Laws of the Knives

Idaho is very strict for carrying knives concealed. Carrying any deadly or dangerous weapon such as dirks, daggers, and bowie knives concealed is a crime. These dangerous or deadly weapons may cause serious injuries or even death.

“[2] “(a) Concealed weapon” means any deadly weapon carried on or about the person in a manner not discernible by ordinary observation;

(i) Any dirk, dirk knife, bowie knife, dagger or firearm;

(ii) Any other weapon, device, instrument, material or substance that is designed and manufactured to be readily capable of causing death or serious bodily injury; or

(iii) Any other weapon, device, instrument, material or substance that is intended by the person to be readily capable of causing death or serious bodily injury;”

Some kind of knives or cleavers or other instruments that are used for processing, preparation of eating food are not under deadly weapons.

Also, the knives with four (4) inches of blade size or less are not under the deadly weapons. So, these sorts of knives are safe if it’s concealed.

“(c) The term “deadly weapon” does not include:

(i) Any knife, cleaver or other instruments that are intended by the person to be used in the processing, preparation or eating of food;

In Case of the Influence of Alcohol or Drugs

If a person is under the influence of an intoxicating alcohol/drink or drug, he/she cannot carry a concealed weapon/knife and it would be a misdemeanor.

“18-3302B: CARRYING CONCEALED WEAPONS UNDER THE INFLUENCE OF ALCOHOL OR DRUGS- (1) It shall be unlawful for any person to carry a concealed weapon on or about his person when intoxicated or under the influence of an intoxicating drink or drug. Any violation of the provisions of this section shall be a misdemeanor.”

Licensing of a knife is important for carrying it anywhere open or concealed. But still it is forbidden to carry a concealed weapon in:

Although, this law will not be applied to some individuals; who,

“Code 18-3302C: PROHIBITED CONDUCT– Any person obtaining a license under the provisions of section 18-3302, Idaho Code, shall not:

(1) Carry a concealed weapon in a courthouse, juvenile detention facility or jail, public or private school, except as provided in subsection (4)(f) of section 18-3302D, Idaho Code; provided that, this subsection shall not apply to:

(a)  Peace officers while acting within the scope of their employment;

(b)  Security personnel while actually engaged in their employment; or

(c)  Any person who is authorized to carry a weapon by a person, board or other entity having authority over the building or facility; or

(2)  Provide information on the application for a permit to carry a concealed weapon knowing the same to be untrue.

Any person violating the provisions of this section shall be guilty of a misdemeanor.”

Any person is not allowed to carry a concealed knife or weapon which is not licensed. But to some extent, a license is not needed if you face one of the situations mentioned below,

(a) In the person’s place of abode or fixed place of business;

(b) On property in which the person has any ownership or leasehold interest;

(c) On private property where the person has permission to carry concealed weapons from any person with an ownership or leasehold interest;

(d) Outside the limits of or confines of any city, if the person is over eighteen (18) years of age and is not otherwise disqualified from being issued a license under subsection (11) of this section.”

Knife Laws for Minors in Idaho

It is guilty of a misdemeanor if anyone sells any weapons/dangerous knives to any minor under the age of eighteen (18) years old without the written consent of the parent or guardian of the minor. Here the weapon means, any dirks, daggers, Bowie and other dangerous knives.

What will be the punishment?

If anyone violates the law, he/she will be punished by,

Code18-3302A: SALE OF WEAPONS TO MINORS- “It shall be unlawful to directly or indirectly sell to any minor under the age of eighteen (18) years any weapon without the written consent of the parent or guardian of the minor.

As used in this section, “weapon” shall mean any dirk, dirk knife, bowie knife, dagger, pistol, revolver or gun.”

When can a minor possess a knife?

A minor under the age of eighteen (18) years old can still possess a knife if he/she,

*If any minor under the age of twelve (12) years possess a weapon/dangerous knife should be accompanied by an adult otherwise, it will be guilty of a misdemeanor.

18-3302E: POSSESSION OF A WEAPON BY A MINOR- “(1) It shall be unlawful for any person under the age of eighteen (18) years to possess or have in possession any weapon, as defined in section 18-3302A, Idaho Code unless he:

(a)  Has the written permission of his parent or guardian to possess the weapon, or

(b)  Is accompanied by his parent or guardian while he has the weapon in his possession.

(2) Any minor under the age of twelve (12) years in possession of a weapon shall be accompanied by an adult.

(3) Any person who violates the provisions of this section is guilty of a misdemeanor.”

Pocket knives with a blade size of 2.5 inches are allowed in school.

Any deadly or dangerous knives are not allowed and it’s illegal to possess in any building, stadium or other structure on school grounds. Whoever disobeys the law will be punished and this is guilty of a misdemeanor.

“18-3302D: POSSESSING WEAPONS OR FIREARMS ON SCHOOL PROPERTY- (1) (a) It shall be unlawful and is a misdemeanor for any person to possess a firearm or other deadly or dangerous weapon while on the property of a school or in those portions of any building, stadium or other structure on school grounds which, at the time of the violation, were being used for an activity sponsored by or through a school in this state or while riding school provided transportation.

(b) The provisions of this section regarding the possession of a firearm or other deadly or dangerous weapon on school property shall also apply to students of schools while attending or participating in any school-sponsored activity, program or event regardless of location.”

No dangerous weapon is allowed on school premises but the pocket knives are allowed with a blade of fewer than 2.5 inches in length.

“(2 ) The term “dangerous weapon” means a weapon, device, instrument, material, or substance, animate or inanimate, that is used for, or is readily capable of, causing death or serious bodily injury, except that such term does not include a pocket knife with a blade of less than 2 1/2 inches in length.”

Sum up to the knife laws in Idaho

As it is mentioned at the beginning of the article, Knife laws in Idaho are pretty complicated and strict than the other states and you got to remember a lot of things while knowing about the laws.

All knives are legal to carry openly in Idaho. But the rules and regulations are applicable for concealed carry knives especially for dirks, daggers and bowie knives and other dangerous or deadly knives.

Age is a matter here and licensing or permit to carry knives are big issues.

Overall, knife laws in Idaho are not that tricky at all. You just need to remember some important factors.