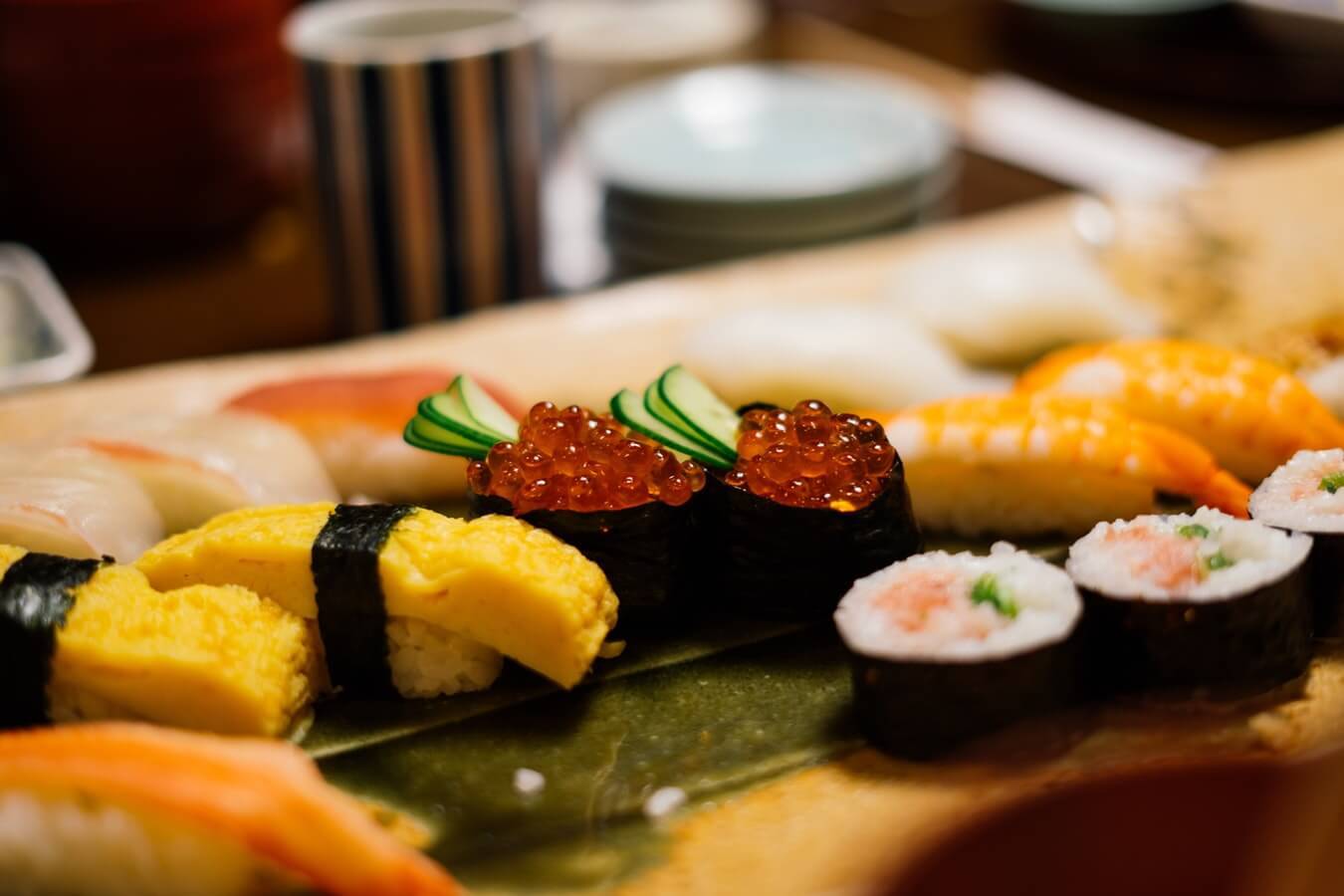 Sushi is one of those Japanese cuisines that are made with great dedication, expertise and craftsmanship.

No matter how many different kinds of sushi rolls are prevalent in the market, a true and great piece of sushi is made with inanimate care starting from its aging and cooking process and crafted by infamous cutting, shaping and garnishing techniques to deliver the peak of flavor to the sushi roll at its best.

The very art of making the sushi rolls is a matter of national pride to the Japanese sushi chefs and a tradition in Japan.

When speaking about the art of making these traditional Japanese sushi rolls, there are plenty of things to consider starting from its rolling techniques to its cutting technique

Sushi – Words We Need To Be Accustomed With

When it comes to rolling and cutting these Japanese delicacy there are of course some basic Japanese terms commonly used in the rolling process of a sushi. We verily need to be accustomed with these Japanese terms for the sake of making our quest of crafting the sushi rolls as easily as possible.

Rolling Out The Sushi Rolls

But hold on! In the quest of our sushi endeavor we just cannot stop here. Our Sushi Dictionary and vocab-skill needs to be stretched a tiny bit further by understanding the following 3 Japanese rolling techniques of the Sushi.

The 3 Japanese Rolling techniques for rolling the Sushi are as follow:

Urumaki happens to be a common western style of making sushi rolls and is different from the traditional Japanese ones.

Hosomaki sushi roll is the traditional way of rolling sushi in Japan.

Futomaki sushi rolls are thicker is size and comes with maximum amount of ingredients in it.

On our quest of rolling out the sushi often times we get confused with roll and hand roll techniques of Sushi.

However there is nothing to get confused when we are accustomed with the above common Japanese terms of rolling the sushi.

What’s The Difference Between Roll And Hand Roll? 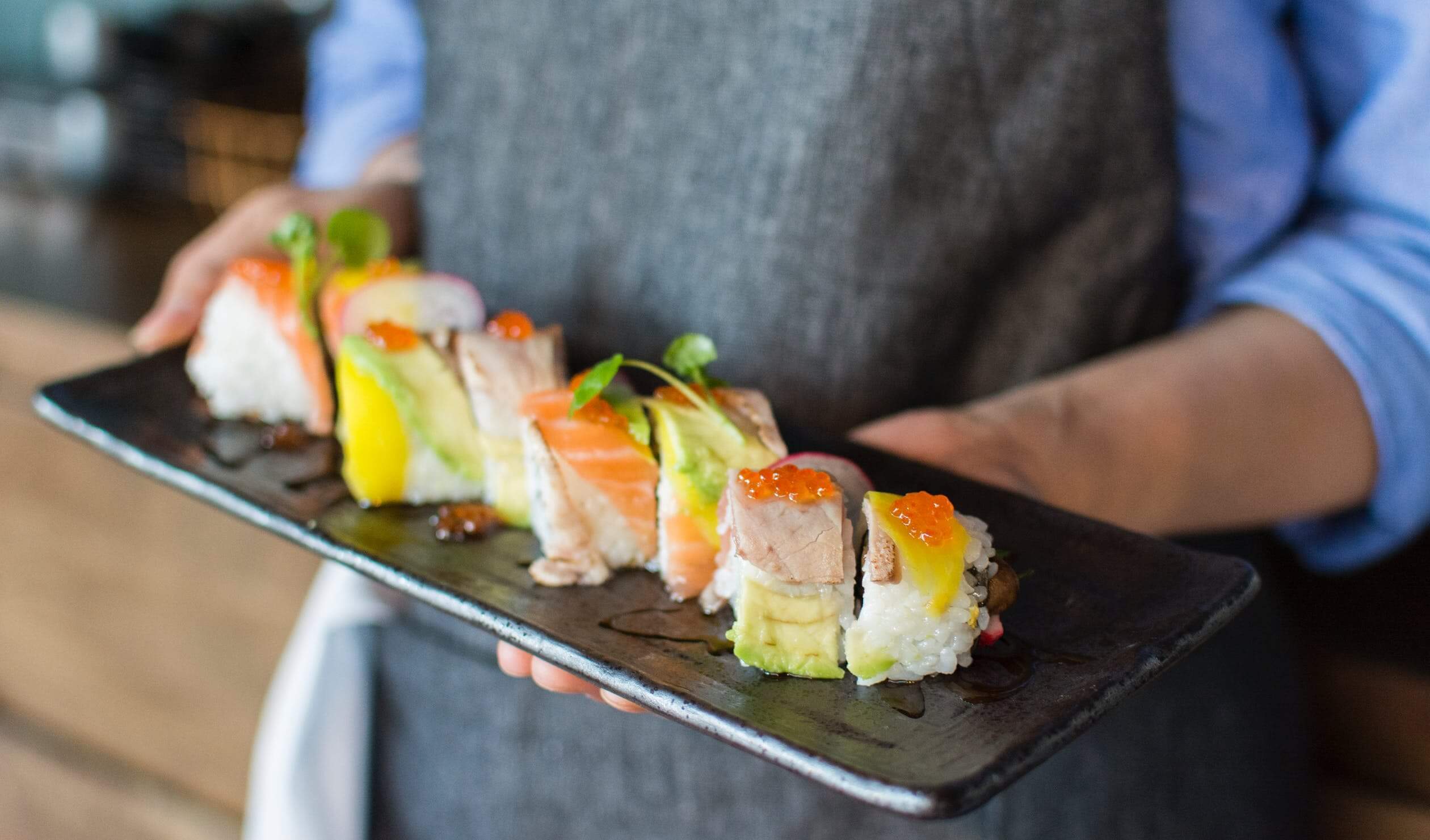 It takes time and practice to master the culinary art of making the kaleidoscopic sushi.

Mastering the art starts from the very process of cutting the fillets, julienning the vegetables, sliding the knife, cutting diagonal shape in ‘nori’ sheets and then making rolls from the half-cut nori sheets.

But then again let’s summarize the basic difference between roll and hand rolls when it comes to making the Sushi.

The Japanese terms of rolling sushi being clear to us, when in a sushi bar one is asked for roll or hand roll while ordering for sushi one needs no more to stay confused.

Maki is the regular form of sushi rolls which is cut into pieces and circles.

Moreover, the hand rolled sushi is rolled with hands and unlike the Maki rolls, the Temaki rolls has no use of Makisu (the Japanese bamboo mat; as explained earlier) to form the rolls.

How Many Pieces Are In A Roll Of Sushi?

While hand-rolled or Temaki Sushi is uncut the rolled or Maki Sushi are cut into usually 6 to 8 pieces.

But that’s just part of the story…when it comes to counting the pieces of a Sushi roll.

The Maki sushi once made will be cut into pieces depending on the thickness and thinness of the type of roll ordered. If it is the thinner type of sushi roll as in-  Hosomaki (as discussed above) the Maki roll will be usually cut into 6 pieces while it will be cut onto 8 pieces if the roll ordered is of thicker type as in – Futomaki

With our sushi rolling techniques de-mystified, let’s delve into the mysteries of how the expert sushi chefs cut six to seven sushi rolls in an instant and how can we master the art of doing so.

How To Cut Sushi Rolls? 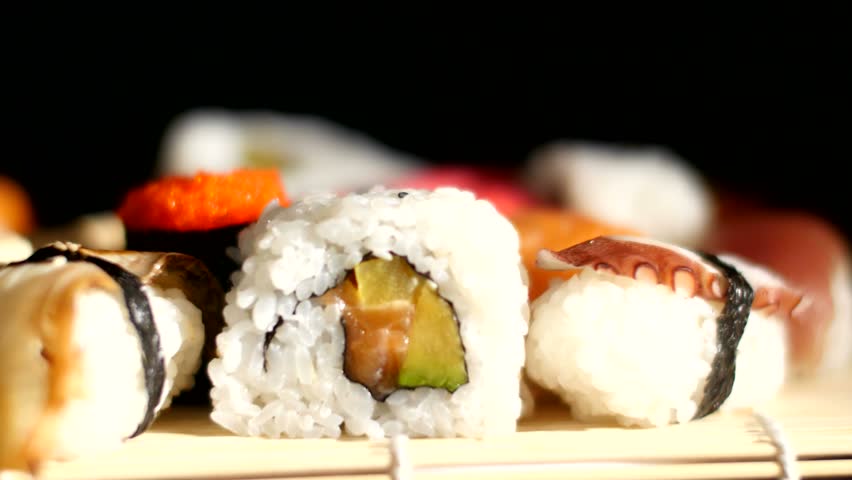 It takes patience and practice to make the Sushi roll taste great. Apart from sushi rice and condiments and arrays of fillings for the sushi roll one will also need to master the skill of rolling the sushi on the bamboo mat called ‘makisu’.

After mastering the rolling technique, comes the significance of cutting the rolls.

Why cutting the sushi rolls matter so much in preparing the sushi? Allow me to shed some light here.

You see, Japanese are known for their expertise in making the culinary art as beautiful as possible. In fact did you ever wonder that the Japanese study culinary arts emphasizing on subjects as- Japanese knife skills and basic sushi etiquette’s and so on? Yes, they do so.

The sushi rolls being the Japanese culinary staple itself, is a delicacy to be mastered.

The culinary endeavor of making the perfect sushi rolls is about knowing the technique and learning the knife skills and set of sushi-making rules for ultimately preparing the flawless sushi.

Let me now please explain to you on how to cut the  sushi rolls in the perfect shape combining the kaleidoscopic beautifully display of the colorful ingredients inside while make the flavors peak out from the thin rim of black nori.

Apart from the fact the sushi rolls are artistically and diagonally cut to deliver its round shape, there is more to understanding the proper way of cutting the rolls.

It is because for the beginners the rolls will tend to get easily crushed if not properly cut.

Then again sharp knife is best for cutting the rolls without crushing them. Then with practice and attempts crafting and cutting the sushi rolls into perfect rounds will get lot easy.

What Kind Of Knife Do You Need To Cut Sushi?

The proper use of knife is so much emphasized while making sushi is because one will need to use a couple of knives while making a sushi.

The various uses of knives will be explained and wait for it.

It is very important to understand the Sushi knives as the knives are designed to perform the specific tasks in creating the perfect sushi.

The world of sushi requires various cutting process starting from julienning the raw vegetables, filleting the fish and then cutting the precise shaped rolls of the sushi itself.

However both the sushi knife and sashimi knives are usually sharp-edged and are made of high-carbon steel and it is uncommon to find any ceramic bladed ones.

Both of the knives come with a sharp cutting edge, a flat edged side and a full tang or half tang.

A sushi knife is multifaceted to perform 3 essential tasks of filleting fish, cutting vegetables and cutting the rolls of sushi. All though there are handcrafted sushi knives that has been created by the master artisans, the general sushi knives can also effectively perform both the tasks of sashimi or sushi.

The general sushi knives usually comes with D-shaped wooden handles, sharp edges and slender to make gliding through rolls and fish as effortless as possible. Apart from the above factors, the Japanese sushi knives are known for its rust-resistant quality and durability when compared to Western brands of Sushi or sashimi knives.

Here are the basic types of sushi knives which are most commonly used as absolute accessories when it comes to making sushi:

The willow-shaped Yanagiba knives can handle most of the tasks related to sushi. These thin slender knives are also known to excel in cutting the sushi rolls while serving the purpose of being a standard sashimi knife.

The thin-bladed and straight-edged Usuba knives are ideal for julienning vegetables, mincing onions and making thin textured layers of vegetable fillings for the sushi.

These pointed-curved Japanese knives are ideal for carving and portioning fish and the small bones of the fish for the sushi filling. The Deba knives are usually thick-bladed and not to be confused with the Japanese Honesuki Knives.

Point to be noted: As it is known that traditional Japanese sushi are usually made with fish as the sashimi inside, these days the variations of this delicacy also uses meat items as its filling.

Santoku knives cannot be termed as a sushi knife. However when it comes to making sushi, these types of knives can be helpful as the knives are designed to perform 3 specific tasks of cooking as – slicing, mincing and dicing. Santoku knives are somewhat a western-style knives fit for all needs and buying a Santoku knife for sushi can be considered as a good minimalist approach.

Provided we have our sharp Sushi Knife, our Makitsu, and our knowledge on the rolling techniques of a sushi what left to know about is – the different methods of cutting sushi rolls.

Basically, Sushi is the Japanese culinary staple for not only its beauty but also for its simplicity. Cutting the sushi rolls needs a certain kind of practice and skill because the rolls might get easily crushed if not cut properly.

The tailed end is left a bit bigger than the roll itself because that portion will be used for rolling the whole sushi.

However to make the whole process a lot easier there are sushi roll cutters available and can be a good option for beginners .

When it comes to the art of making sushi rolls, the emphasis is always given on using sharp knives and fresh ingredients. The craft of sushi making combines its delicate appearance to its distinguishable taste.

While cutting the fish and the ingredients is an important segment of the sushi, one will also need to master certain levels skill for making sushi rolls.

In fact the ingredients of the fillings as in sashimi of the sushi should be cut in such a way that all together the ingredients can be easily rolled into a perfect tube-shaped heavenly sushi.

Here lies the significance of mastering the art of cutting and rolling when it comes to sushi.