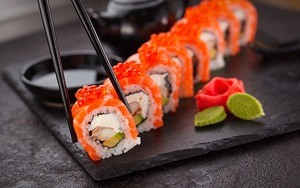 Sushi is a very popular kind of food these days. A lot of people say that they like eating sushi because it is a different kind of food and it tastes good also.

However, sushi is eaten with chopsticks and fingers. Sushi has a great food quality and it can also be used as a great meal option for breakfast, lunch or dinner.

Sushi making began around the 8th century in Japan. The origin of sushi first developed in Asia, especially Southeast Asia. In the Muromachi period, sushi making started adding rice as well as fish.

At present times, Sushi is being eaten not only as a Japanese culture but also a fast food.

⇒ Here’s a sushi knife buying guide for you

Why is it called Sushi?

The word “sushi” means “it is sour” which means it is stored in salt.

Basically, sushi is fermented fish added with rice preserved in salt and it is a thousand years old recipe. The word “Sushi” often brings multiple meaning to the non-primitive Japanese.

Why is Sushi so popular?

Sushi is usually a steamed food. It is very rare when you find sushi swathed in oil. So, its food quality is extremely good for health.

Sushi is the most convenient food. Easy to make for the beginners and to eat also. It can be carried easily and can be packed for takeaway too.

Sushi consists of sticky rice along with seaweed and other different ingredients. It has different flavors than fast foods. 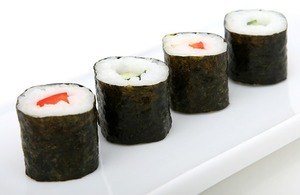 Sushi making needs to have a lot of ingredients, though for the beginners it is not very tough to find different ingredients in the pantry at your home.

1. Sushi rice- At the top of the list sushi rice is the most important thing.

2. Rice vinegar- the Second ingredient is rice vinegar, which is used for the tart to combine the flavor.

3. Kombu- It is used in the rice cooker during the soaking of rice and cooking period so that it can give the rice dashi flavor.

4. Sake- Sake can be used along with kombu for the dashi flavor.

5. Wasabi- Wasabi has a love and hate relationship with sushi. Sometimes it is swiped or may be added to the soy sauce for dipping the sushi.

6. Soy sauce- This sauce is the most important sauce for eating sushi.

7. Sushi grade fish- Before adding fish to the sushi it should have been sushi graded.

9. Sushi ginger/ Gari- It is usually eaten after sushi or between dishes so that it can cleanse the pallet.

10. Green tea- Green tea is served with sushi so that it can refresh mouth.

How to make sushi at home? 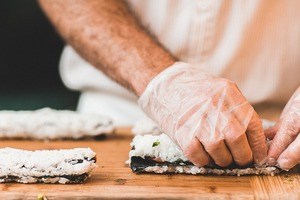 For the beginner’s sushi making is not so complicated. First, clean the rice in the water until the water comes out clear. Then, cook the rice for 10 minutes and wait for the rice to soak the water.

Next, add sugar, vinegar and stir it. Spread the rice on a baking tray with a slightly damp tea towel to make it cool.

Now, a sushi rolling mat is needed to place the nori sheet. Then wet your hand to prevent sticking and take some rice to spread it on the nori sheet. Now all the stuff must have filled across the middle of the rice.

After that, roll the mat slowly and make sure that all the ingredients stay in place. To prevent sticking brush the knife with rice vinegar and cut the roll into a perfectly round shape. Now sushi is ready and serves it with wasabi and pickled ginger!

How to roll a sushi?

This part is a bit hard to explain. But not impossible. First, put the ingredients into the center.

Then bind the roll so that all the pieces of stuff are in the right place. Roll the sushi mat. Next thing is to squeeze to stick it and gently unfold the bamboo mat.

Now do it at least 3 or 4 times just to give it an extra perfection. Rolling of a sushi is easy!

Now check it and if it isn’t ready yet then go through the process one more time. 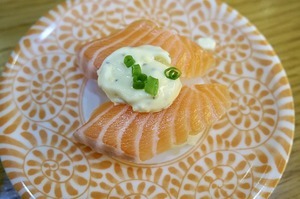 1. If you are a beginner then try to start it with ingredients that are cooked. It will make the process easier.

2. Start with some easy and familiar ingredients. If you know the ingredients well and you have tried them before then it will be easy to make the sushi.

3. If your sushi has fish then you should go with a fish which has a strong feature so that little flaws of your first attempt shouldn’t be noticed because of the strong presence of a fish like Tuna.

4. Sometimes making sushi with meat or fish is not easy but you could try it with vegetables. By this, you will be familiar with vegetables and it could bring some different taste also.

5. For the beginners better try it with maki rolls rather than sashimi. Maki is readymade rolls and sashimi is with raw ingredients. So picking make will be a lot easier to make a sushi.

6. About your rice be careful that it is not too much soft or too much hard. It should be well cooked. So that the roll gets perfect in shape.

7. While spreading rice in the nori make sure you use your hand gently. Do not press the rice too hard so that it gets squeezed. By doing this the roll is not going to taste very good. So, do it in a light way.

8. For a perfect shape of the roll, you will need a very sharp knife. By the time you cut the roll the knife you are using is going to play a big role. So choose a good one.

9. Picking the right fish is also a very important part for the beginners. After bringing the fish in the kitchen it should be washed and sliced properly.

10. A small bowl of water and towel should be kept close to you. Sushi rice is very sticky and you don’t want to waste time by going far for dipping in water.

11. Do not refrigerate the sushi after making it. Because the rice will get harder.

12. Before preparing your sushi to make sure you have all the ingredients, equipment, and serving dishes. So that sushi making for beginners is going to be an easy process.

There are almost 5 types of sushi. Nigiri, Maki, Temaki, Uramaki, and Sashimi. Sushi is extremely beneficial for health. Reduces chances of cancer, good for the heart, improves the metabolism. Before making sushi it could be very much helpful for a beginner to know all those outstanding facts about sushi. Sushi making is an art.

How To Cook Sushi At Home 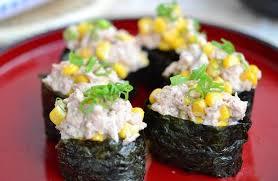 Sushi is a very popular Asian Cuisine.It is basically Japanese dish and originates in a southeast  Asian dish which is known today as narezushi.It was introduced Japan around the Yayoi period and there is a point to be noted that before being introduced to Japan, Sushi was first developed in Southeast Asia and spread to south China.

There are five main types of Sushi:

Now let’s see how to cook Sushi at home step by step.At first, you need to gather the ingredients which are required for making this delicious dish.

There are some basic ingredients which are mandatory to cook Sushi even if you cook this at home.These are-

You can enjoy and serve the Sushi pieces with Ginger sauce, a little cup of soya sauce or green tea.

For all the beginners GO and START MAKING IT NOW!