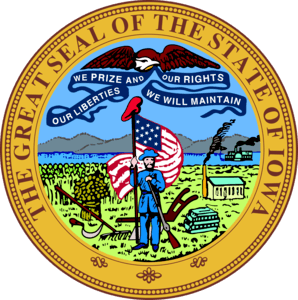 Iowa is a friendly state for knife ownership laws. Only ballistic knives are banned here otherwise all kind of knives are legal to own.

But there are some restrictions while carrying knives concealed. Although, you can carry openly any knives you want.

Knives that are Illegal in Iowa

According to Iowa knife laws, as it is mentioned at the beginning, all knives are legal to own here except the “ballistic knives”.

The code 720.1 says about the ballistic knives’ illegality.

So, owning and carrying open or concealed a spring-operated, elastic material, or compressed gas-based ballistic knife is banned in Iowa.

There are no restrictions for open carry any knives that are legal. But there are laws for concealed carry knives

*Except for the use of hunting or other legal purposes.

According to Iowa knife laws, dangerous weapons are mentioned in code 702.7.

Additionally, any instrument or device of any sort whatsoever which is actually used in such a manner as to indicate that the defendant intends to inflict death or serious injury upon the other, and which, when so used, is capable of inflicting death upon a human being, is a dangerous weapon.

Dangerous weapons include but are not limited to any offensive weapon, pistol, revolver, or other firearm, dagger, razor, stiletto, switchblade knife, knife having a blade exceeding five inches in length, or any portable device or weapon directing an electric current, impulse, wave, or beam that produces a high-voltage pulse designed to immobilize a person.”

So, it is illegal to conceal carry dangerous knives such as,

The code 724.4 says about the concealed carry laws in details.

“1. Except as otherwise provided in this section, a person who goes armed with a dangerous weapon concealed on or about the person, or who, within the limits of any city, goes armed with a pistol or revolver, or any loaded firearm of any kind, whether concealed or not, or who knowingly carries or transports in a vehicle with a pistol or revolver, commits an aggravated misdemeanor.

(a). If the knife has a blade exceeding eight inches in length, commits an aggravated misdemeanor.

(b). If the knife has a blade exceeding five inches but not exceeding eight inches in length, commits a serious misdemeanor.”

When can one carry concealed dangerous weapons/knives?

There are some situations when some individuals can carry concealed weapons in particular places and for this, they won’t be charged. Such as,

The code 724.4 says thoroughly about it.

“4. Subsections 1 through 3 do not apply to any of the following:

(a). A person who goes armed with a dangerous weapon in the person’s own dwelling or place of business, or on land owned or possessed by the person.

(b). A peace officer, when the officer’s duties require the person to carry such weapons.

(d). A correctional officer, when the officer’s duties require, serving under the authority of the Iowa department of corrections…

…(g). A person while the person is lawfully engaged in target practice on a range designed for that purpose or while actually engaged in lawful hunting.

…(j). A law enforcement officer from another state when the officer’s duties require the officer to carry the weapon and the officer is in this state…

(k) A person engaged in the business of transporting prisoners under a contract with the Iowa department of corrections or a county sheriff, a similar agency from another state, or the federal government.”

A person should have the license or permit to carry a dangerous knife. The code 724.4 explains it thoroughly.

All schools or educational institutions are the knife free zone in Iowa. No dangerous weapons/knives are allowed in the school premises. The code 724.4A says it all.

Sum up to the knife laws in Iowa

When switchblades, daggers, stilettos type dangerous knives are legal to own and even carry openly, these knives become illegal if they are carried concealed. Blade sizes become the matter of fact then too.

The ballistic knife is the only one banned knife here and overall there are no restrictions on knife ownership rather those are very friendly.